The gyro in the attitude indicator is mounted in a horizontal plane and depends upon rigidity in space for its operation. The horizon bar represents the true horizon. This bar is fixed to the gyro and remains in a horizontal plane as the aircraft is pitched or banked about its lateral or longitudinal axis, indicating the attitude of the aircraft relative to the true horizon.


This instrument is used to know about the attitude of the aircraft without any visual reference .


With it, the pilot can know if the aircraft is: 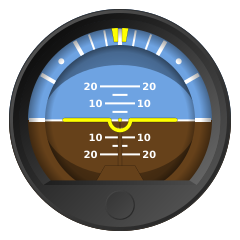 There is also a miniature aircraft (yellow) and horizon bar representation. The horizon is displayed using a white line which separates the instrument in two parts:

Note that the little orange triangle on the top shows the bank angle with the white graduation.